You are a child haunted by the spookiest nightmares ever. You have to jump out of your bed so you could hide under it. But you are so scared that you’ve taken a bad direction! It will be a terribly long run!

The child figure starts the game on the head of the child in the bed. It rolls 2d6 each turn, then it chooses if it takes move for the value of the first die roll, or move for the value of the second die roll, or if it moves for the value of both dice in total. Remember, however, that you can never choose a different number (for example lower one) than a one on a dice: you as well as your opponent must always respect exactly the numbers rolled. But you, as well as your opponent, can always choose the direction of your move, after the roll.

The second player plays apparitions that hunt the child so it could not reach the safe point under its bed or survive till the dawn comes. This player starts with one apparition placed on any of the bigger spots (“magic gateways”) of his choice. He or she also chooses from the three types of apparitions:

This player cannot choose which value of the multiple dice apply, they always count together.

If the child and the apparition figure meet at the same spot, the child loses. The figures can leap across one another, only stepping on the very same spot at the end of the rolled move applies as the “fatal meeting”.

If the child gets under its bed (reaching the leg of the bed) without being caught, it survives this night; the same if it endures 12 its turns (12 hours of the night) – count the turns by some counters or dice. Very easy for the first night… but next night, one more apparition appears! Its player again chooses which type of apparition it is and on which of the gateways it starts, and if the child survives another night, another apparition appears (!!!) and so on and so on… I.e.: 2 apparitions hunt the child in round 2, three apparitions in round 3, four in round 4… Count how many nights the child managed to “survive”, then exchange your roles and see if your opponent can survive more nights than you.

The bigger spots on the plan – they serve not only as apparitions’ starting points but also as “magic gateways”: once any figure steps on the gateway, it can continue on any of the other gateways on the plan of its controller’s choice.

If two apparitions meet on one spot, nothing extraordinary happens. They just chat and will continue in their ordinary move next turn.

In case you feel the hunting is too random and that it takes too many turns to catch the child, adopt the rule that the apparitions can choose among the rolled dice too (to apply the result on the first dice, the second dice, the third one, or in total) then it will be real hell for the child, especially if the apparition's player uses Kikimoras (you can also adopt a rule limiting the number of Kikimoras in the apparitions team).

Use your imagination and adapt any rules you wish and invent: Remember that you exchange roles, so any rule adopted is fair (when you are disadvantaged as a child, for example, don't worry, the same hard conditions are just waiting for your opponent to make him mad too, very soon),

More people can be involved in the game. Just make teams of creatures or scared children, or take turns and try to beat your score.

If you like the game and play it often, you can as well make your own figures for it. 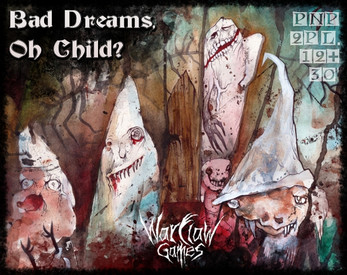 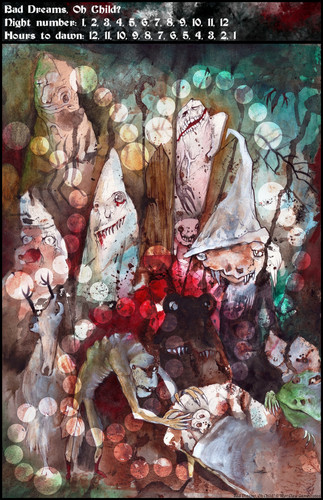